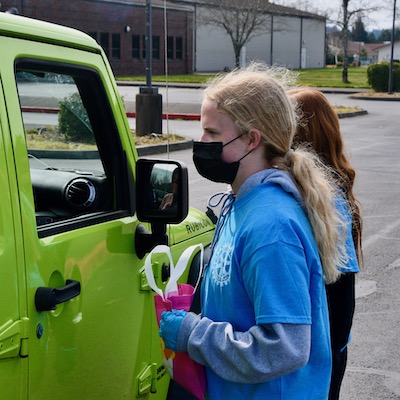 What's their bag? For Brea Blankenship and many fellow students it is giving back to the community through the Interact Club.

Easter is a time of renewal, but that could be said for any time during the high school calendar year for the Interact Club at Siuslaw.

"It's cool to give back to the community," club president Brea Blankenship said Saturday, as Interact members distributed Easter baskets at the Siuslaw Middle School parking lot.

"It's been tough getting going, to do our normal stuff, but we're trying to do whatever we can."

Club advisor Bob Teter of the sponsoring Rotary Club is proud of his high school wards.

"According to some of the teachers at the high school, this is probably the most active club this year," Teter said. "I feel really good about it.

"I've been in good spirits being able to get out do some things in the community, to get together and see each other and do some things."

Interact Club has been a haven for super-active students, many who are members of Siuslaw athletic teams.

Saturday, those eight were joined by Pluma Haarstad, Liz Garcia and Winnie Zhen in passing out Easter eggs.

And they had a lot of eggs to pass out, stuffing some 3,300 plastic eggs with candy and special prizes.

"I think a lot of student-athletes are active, are pretty involved in the community," Brea Blankenship said. "They want to do whatever they can to give back."

Club membership may be down, but enthusiasm for what they do is not.

"We've had our meetings virtually, so it's been a bit of a challenge to keep the kids engaged," Teter said. "We've done a lot of work this year.

And there's one more big date on the calendar, and for that the members really get there hands dirty.

"The only other project is with Food Share, helping them in the garden," Teter said. "That's the last project."

Brea Blankenship hopes that the club's work will encourage others, like it encouraged her.

"My freshman year it was Jared Brandt and Madison Reynolds and Lainey Goss. People we looked up to. I've been in Interact ever since."

The joy of renewal continues, despite the challenges.

"Typically we have club meetings during lunch hour at school," Blankenship said. "It's in the announcements. More people know about it.

"This year it's been kind of hard to get hold of people, but the people who have signed up to join are pretty committed. They show up and we've been able to get stuff done.

Yes they are, each and every one of them.