Vikings hold off Harrisburg in opener, 8-5 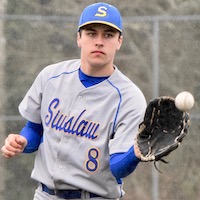 The Siuslaw Vikings plated four runs in the first inning and held off Harrisburg, 8-5, in a the nonleague season-opening baseball game Wednesday at Siuslaw.

The Vikings host Sutherlin in a doubleheader Thursday, with the first pitch scheduled for 3 p.m. Coast Radio will broadcast the games.

"We were pitcher by committee tonight because of three games in two days, as well as this being our first outing," Siuslaw coach Tom Shinn said. "I didn't want to stretch anyone too thin.

"I really liked the approach that the team took in their at bats in the first two innings.  We had focused on some specific offensive ideas during the first two weeks, things that I felt really hurt us last season.

"I hope the kids see how that work had been successful.  I felt like we got away from that a little in the middle innings, third, fourth, and fifth, but refocused in the sixth to close it out."

Senior Gabe Simington and sophomore Chayton James had 2 RBIs each for the Vikings, while James, junior Jared Northrop and sophomore Elijah Blankenship each scored 2 runs.

Northrop and Blankenship had 2 stolen bases each, while Blankenship and Simington both had doubles for the only extra-base hits by the Vikings.

Junior Caleb Hennesse pitched 1 2-3 innings of scoreless relief for the win, while sophomore Dalton Stinger, Siuslaw's sixth and final pitcher in the game, hurled a scoreless seventh for the save.

Senior Dax Bennett led Harrisburg with 2 runs scored, a double and a stolen base. Senior co-captain Devin Nelson, the starting pitcher, had a triple and a run scored.

Harrisburg fell to 0-2 on the season, losing its season opener 17-12 Monday at Monroe.