Vikings' Rannow blazes to victory in 1,500 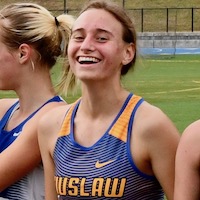 Rannow finished in 4 minutes, 50.75a seconds to move up three notches on the school's all-time top 10 list, passing Juline Walker and Hadley Roe.

"She was all alone and it was really windy," Siuslaw coach Chris Johnson said of Rannow's race. "She could run close to the school record (4:42.62a, Raelyn Robinson, 2010) in the right conditions with help."

Junior Anne Wartnik won the girls 3,000 and sophomore Ryan Jennings the boys 300 hurdles for the only other Vikings victories.

Junior Ryan Rendon-Padilla was second in the javelin at 188 feet even, and tossed the discus a PR 122-2 for 11th place.

The Siuslaw girls finished fifth in the 13-school field, while the Vikings boys were 10th of 13.

The Sky-Em District Championships are next, Friday and Saturday, May 10-11, at Marist Catholic in Eugene.

The state championships are the following Friday and Saturday at Mt. Hood Community College in Gresham.