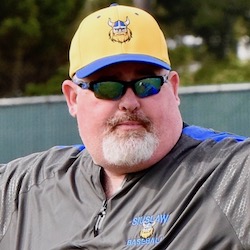 It was the first win since the season opener for the Vikings, now 1-12 in league and 2-18 overall.

Seniors Tim Lowder, Gabe Simington and Jordan Taniguchi will be honored between games.

"I can't express how proud I am of the men tonight," Siuslaw coach Tom Shinn said. "They played hard and executed defensively.

"They are putting together the things that we have been working on in practice and it really showed tonight. I hope this feeling carries into our games on Friday."

The Vikings plated all the runs they needed in the bottom of the first inning on a sacrifice fly by Hennessee and an RBI groundout by Chayton James.

Elmira cut the lead in half with a run in the top of the fifth, a sacrifice fly by Bryson Estrella scoring  Landen Parker.

Siuslaw added insurance runs in the bottom of the sixth when Northrop singled home Clay Kramer and later scored on a wild pitch.

"I was really happy with our approach at the plate," Shinn said. "We only tallied six hits on the night, but we are cutting down the strikeouts as a team. Both Caleb and Elijah (Blankenship) had well hit balls that ended up in gloves tonight.

"Defensively we played excellently. Gabe did a heck of a job at first base and scooped a couple of throws and saved our bacon on more than a couple plays.

"Chayton James got a fly ball down the right field line that was really tough. He then threw to home in an attempt to get a tagging runner. While that throw was a little late. Elijah threw a seed to Dalton (Stinger) at third base to get a trail runner.

"We turned a double play in the second when Elmira had bases loaded that killed a rally for them."