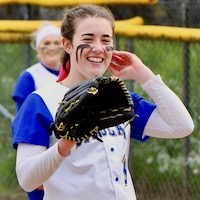 Siuslaw junior pitcher Nina Aaron hurled two complete-game victories Friday and went 4-for-4 in the opener to lead the Lady Vikings to a softball sweep of the visiting Marshfield Pirates, 7-6 and 4-3.

The two wins secured a fourth-place finish in the Sky-Em League for Siuslaw at 5-10. The Lady Vikings were 5-16 overall.

"We peaked late in the season with four wins in our last five games," Siuslaw coach Sean O'Mara noted. "The athletes should be proud of their continued effort through all the losses to come out at the end of the season with some real solid efforts on offense, defense and mental toughness."

In the opener, the Lady Vikings rallied for two runs in the bottom of the seventh for the victory.

Aaron had two RBIs and a double as well as four hits.

Senior Hayley Meier was 3-for-4, freshman Bailey Overton 2-for-4 with a triple, two runs and an RBI, senior Lupita Figueroa 2-for-4 with an RBI and senior Lexie Smith 1-for-2 with 2 RBIs.

"In the first game I feel like the athletes really showed up to play," O'Mara said. "They were loose but focused. They did not let the distractions of Senior Night, at their home field, or the ebb and flow of the game dictate their approach on offense and defense.

"Overall, I was very pleased with the progress the athletes showed in both their mental and physical game."

In the nightcap, Overton was 2-for-3 with a run scored and two stolen bases to ignite the Siuslaw offense.

The Lady Vikings outhit the Pirates in the two games, 20-13.

No. 1 Lupita Figueroa, who was joined by parents Jorge Figueroa and Belen Rivas

No. 5 Angela Bartlett, who was joined by sister Abigail Bartlett

No. 11 Alexis Smith, joined by parents Tara and Dan Smith

No. 21 Hayley Meier, joined by parents John and Nicole Meier

No. 12 Alyssa Richards, joined by parents Kevin and Susie Richards

"These coaches have had a long term, positive impact on our athletes' lives, well beyond the game of softball itself," O'Mara said. "We are lucky to have them in this program and thank them for all they have done."