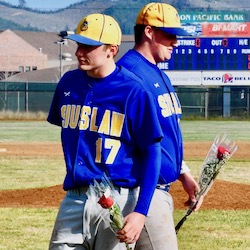 The Marshfield Pirates mounted a comeback in the opener and made no doubt of it in the nightcap Friday to sweep a baseball doubleheader from the Siuslaw Vikings at Dodson Field, 12-6 and 14-0.

Friday was senior recognition night for Vikings Tim Lowder, Gabe Simington and Jordan Taniguchi, who were honored between games.

In the opener Friday, Simington — a four-year starter from Mapleton — pitched 4 2-3 solid innings, striking out 10 while throwing 108 pitches. Marshfield rallied for five runs in the fifth against Simington, none of the runs earned.

Junior Caleb Hennessee was 2-for-4 with two RBIs and two stolen bases, junior Dalton Stinger 1-for-3 with an RBI and two runs scored, Simington was 2-for-4, sophomore Zach Stinger had a double and junior Jared Northrop scored two runs.

"Only three of Marshfield's 12 runs were earned in this game," Siuslaw coach Tom Shinn noted. "Our six errors came at very untimely times and led to pitchers needing to throw more pitches to get out of the inning.

"Offensively we did well early, but when they made a pitching change, we struggled to adjust to the new pitcher and seemed to run out of steam."

In the nightcap, Marshfield plated eight runs in the second inning and five more in the sixth.

Tim Lowder, who was joined by parents Rhonda and Nathan Lowder

Gabe Simington, who was joined by parents Cara and Mike Simington

Jordan Taniguchi, who was joined by parents Brandi Taniguchi and Jeff Gray