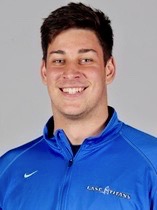 Lane Community College freshman Trent Reavis did some heavy lifting Saturday to lead the Titans men to the Southern Region Track and Field Championships title at the Eugene campus.

Reavis, a 2018 Siuslaw graduate, won the shot put and the discus, finished fourth in the hammer and placed sixth in the javelin as the Titans men won with 266 points.

All but the shot put were collegiate personal records for Reavis, who is the Siuslaw boys record-holder in the discus and No. 2 in both the shot put and javelin.

Next up is the Northwest Athletic Conference championships, Monday and Tuesday, May 20-21, at Mt. Hood Community College in Gresham.