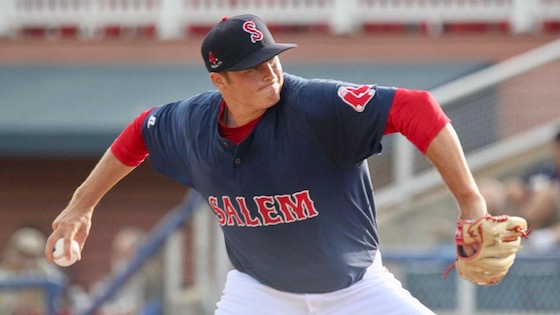 Thompson, who will be 26 on Sept. 22, currently is rehabbing at the Red Sox facility in Fort Myers, Fla.

"It was most disappointing, because he was feeling pretty good about how things were going," his father, Jon Thompson, said.

Thompson had been pitching in late relief this season for the Salem (Va.) Red Sox of the Class A-Advance Carolina League after spending his first two seasons in the Red Sox organization as a starter.

"Salem was grooming him to be a closer," his father said. "His numbers ... weren't bad."

Through four games, the former Oregon State star was 0-1 with a 3.86 earned run average and five strikeouts in seven innings. He had allowed only one walk while posting an impressive walks and hits to innings pitched (WHIP) ratio of 0.86.

The injury was detected in his last outing, April 17, in a home game against the Wilmington (Del.) Blue Rocks.

"In his last outing he came in in the eighth and struck out the side," Jon Thompson said. "He came back out in the ninth and felt a twinge in his elbow."

"He is staying optimistic," Jon Thompson said, "(and) will take advantage of everything he has learned as he rebuilds his mechanics."