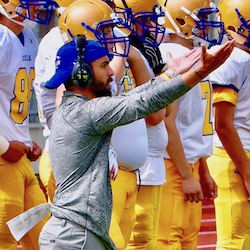 Sam Johnson's halftime talk with his Vikings football players may go down in Siuslaw lore as The Speech.

Or, The Halftime Hollar Heard ‘Round the State.

Whatever, it worked, Johnson's young Vikings rallying from a 19-0 hole to beat the Warriors at Philomath, 28-19.

"He screamed at us a little bit," Vikings junior wide receiver/safety Brady Libby said. "His heartfelt speeches we all felt in our heart.

"We have to back him up on the field. So we went out and did it. It was just a great win."

The Vikings appeared to be the better team in the first half, but they turned the ball over twice in the red zone on downs and twice fumbled the ball to set up short drives for field goals by the Warriors.

"I definitely was down at halftime, pretty in the dumps," Libby said. "We were all pretty low. Most of us thought it was probably a loss in our books.

"But Sam came in and talked to us, we changed around."

Johnson locked out the other coaches to deliver words of, well, encouragement at halftime.

"He wanted to keep it personal between us and the players," Vikings junior running back/linebacker Hector Garcia said. "We talked about it in the locker room, and we came together.

"He gave us time to think about it, and we thought ‘Why not just win? There's no point in losing. What do we have to lose?' So we just won."

Garcia unofficially rolled for 42 yards on 15 carries, scoring on a 1-yard run and a 2-point conversion.

"The second half we really brought it together as a team," Garcia said. "We pushed it right back, a punch to the face, and told 'em we're here and we're ready to fight. That's what we did."

Johnson also lit a fire under junior quarterback Elijah Blankenship, who said: "To be able to lead a team, coming back after halftime, just coming out and punching them in the mouth for three, four straight scores, it was just awesome."

Blankenship had a full game in the second half, unofficially hitting 12 of 20 passes for 170 yards and two touchdowns while leading four consecutive scoring drives that took the Vikings from down 19-0 to up 28-19.

Other than a 65-yard pass completion, Blankenship had a tough first half, hitting 8 of 19 for 117 yards, tossing seven consecutive incompletions before the break.

Interestingly, Blankenship was a starter both Friday night and as well as the last time Siuslaw won, the 2017 season finale at Brookings-Harbor, 31-26.

"It was the first game I started," he recalled. "Mason Wampler was hurt, and I played receiver and caught a touchdown pass.

"That was pretty cool, but this (victory over Philomath) is like way better than that."

The junior signal caller appreciated the offense, but gave a nod to a defense that pitched a shutout in the second half.

"Hector and Dayson (Foglio) and Brady and our defense, they help our team so much," Blankenship said. "Brady and Hector are like run defenders. They've done a great job with that.

"And Dayson, he didn't play last season, but he's just a man. He's the actual man of our team, so he's just really good at defensive end, getting in there and stuff."

"I was connecting with him," Blankenship said. "I've been throwing to him since fifth grade."

So it's two games down for the 1-1 Vikings and seven to go, including the home opener Friday against Newport. Kickoff is 7 p.m.

Johnson expects to win them all. Blankenship seconds that.

"We definitely have a shot at all of them," he said, "and we're going to take it week by week. Don't overlook anybody."

Or give Johnson a reason for another 1-on-1 halftime encouragement.