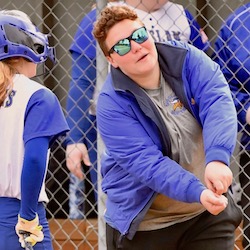 Ashlee Cole was a standout in volleyball, basketball, softball and track and field at Siuslaw

Cole was a four-sport star at Siuslaw, competing in volleyball, basketball, softball and track and field.

She played softball at Northwest Christian College as a catcher/shortstop.

Cole graduated in 2014 and was in the same class as the one that produced head football coach Samuel Johnson.

Cole was the Coast Radio/Siuslaw News Athlete of the Year in 2013-14.

Cole succeeds one-year coach Chad Smith, who led the Lady Vikings to a 5-19 record last season, 1-9 in the Sky-Em League.

Cole will be the fourth coach in as many years for any Lady Viking now in her fourth season with the team.

Cole served as an assistant softball coach for the Vikings last spring, and is listed on coach Sean O'Meara's staff for this coming season.