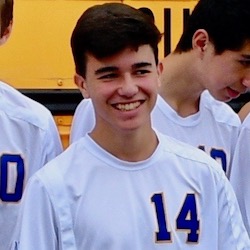 The Siuslaw Vikings soccer team improved to 6-0 and completed a sweep of the Sky-Em League with 2-0 victory Monday at Junction City.

Saturday will be a historical day for Siuslaw when the Vikings host their first-ever home match.

The Vikings will play Waldport at 10 a.m. at a newly painted pitch on the Siuslaw junior varsity baseball field.

"It was going to be Miller Park," Siuslaw coach Lond Tomaro said of the Vikings' first home match. "We've been working on the idea of playing at the school for a few weeks.

"It was contingent on getting a sponsor for the goals. I didn't want to start spreading the word until I was sure we were going to have everything ready to go in time."

This won't be a one-time event for the field.

"They will play and practice there next year," Siuslaw athletic director Chris Johnson said. "So far it's been pretty simple. Coach Tomaro and our grounds team have it under control."

It's put even more wind under the wings of the fledgiing program, which is in its second year at the boys junior varsity level. Next year, the Vikings are expected to field a varsity coed team to compete with the Sky-Em League boys.

"I am excited to have our kids play for a home crowd," Tomaro said. "I think it is great for them to have more fans. And I think it will be great for the community supporters and the younger players to have the opportunity to cheer on the team."

The cheering really got going late in the first half Monday when Garcia, a sophomore midfielder, scored to put Siuslaw up 1-0 at the break.

"The first part of the game was a little choppy, with our team getting used to the field," Tomaro said. "We had a lot of bad touches and missed passes, but not to the extent to give Junction City a distinct advantage in play."

Garcia finally was able to split a pair of defenders and deposit the ball in the lower corner of the near side of the net.

"Despite the slow start, the team took a total of 12 shots on goal before the half," Tomaro said. The Vikings had 15 shots on goal in the second half.

Martin-Mora, also a sophomore midfielder, padded the score midway through the second half.

"Our forwards and midfielders had been pressuring the goal for most of the half," Tomaro said. "(Freshman forward) Yoskar (Delamora) made a beautiful pass through the defense, and Jaime put it into the net."

Garcia led the Vikings with seven shots, while Martin-Mora and junior midfielder Jaxson Jensen had six each. Delamora had three, while Lane, sophomore Jerrel Brumley, senior Matthew Hubbard and sophomore Imanal Pelayo had one each.

Siuslaw caps its season with a match Tuesday, Oct. 15, at Newport.