Vikings getting up to speed as district nears 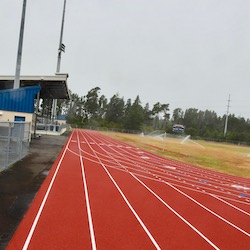 There's a list of things you can expect from Siuslaw cross country coach Chris Johnson.

For one, he's a great record keeper. And he has added at least two names to his list this season in freshmen Samuel Ulrich and Kyle Hughes.

"We had a big list of (personal records) from Saturday," Johnson said, reviewing the Vikings high finishes in the Paul Mariman Invitational at Philomath.

The boys placed third overall thanks to PRs by Ulrich and Hughes, who are now Nos. 5 and 8, respectively, all-time for freshmen boys.

"We had big races from Kyle and from (senior) Anne Wartnik," Johnson said.

The girls were second overall as Wartnik ran her fastest time ever at the 5,000-meter distance to place 10th.

The Vikings have two events remaining before district on Oct. 31, including the Warner Pacific Classic this Saturday in Portland.

Siuslaw's venerable The Run for the Brownies is Thursday, Oct. 24, at Florence Golf Links.

"We're getting more and more fit. The faster times usually start coming about this time of the year," Johnson said. "We still have a lot of work to do."

Another expectation with Johnson. There's always work to do.

Johnson has started filling out the track and field schedule for this spring, which this school year includes hosting the district championships at Hans Petersen Memorial Field.

"We're waiting on the CCI to see where other meets will land," Johnson said. "We are excited to be able to host district track, especially considering the upgrades to the facility — track resurface and new discus cage."

First event is the Siuslaw Icebreaker on Thursday, March 19.