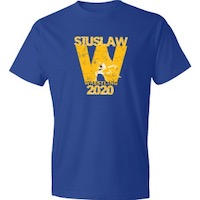 Delamora pinned Bend's Austino Montez in 2 minutes, 9 seconds to win at 106 pounds, Buss pinned Sander Allison of Mazama in 1:22 in the 120 final and LaCosse won by major decision over Daniel Jaramillo of Ridgeview, 15-7, at 145.

Siuslaw finished fourth among 13 schools with 122 points despite entering only seven wrestlers.

LaCosse had a team-high 27 team points, with Delamora and Buss scoring 26 each.

Christian Newlan scored 4 points and Louis Gentry 2 for the Vikings.

Next up for Siuslaw is a dual meet with Sutherlin at 6 p.m. Wednesday at Glenn Butler Court.