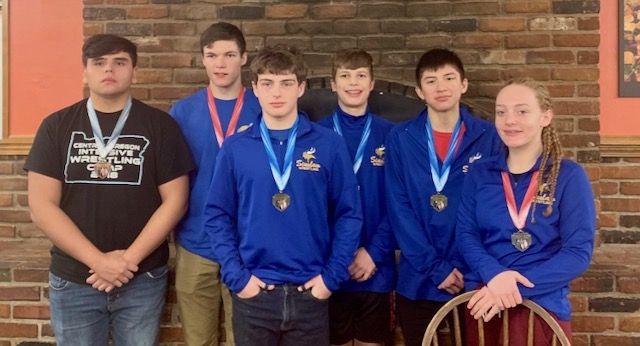 Siuslaw has two road trips next, at the Sutherlin Invitational on Saturday and at Siletz on Thursday, Jan. 16.

The Vikings then host their big event of the season, the Nick Lutz Invitational on Saturday, Jan. 18.

Siuslaw had three wrestlers win titles this past weekend at the Bend Invite — Yoskar Delamora at 106, Mason Buss at 120 and Elijah LaCosse at 145.

"We had a great trip this weekend. In some ways the team's performance was a continuation of what has
already been occurring. We saw the continued excellence of our core individuals.

"Mason Buss continued to be dominant at 120. Yoskar Delamora is establishing himself as a strong contender at 106.  Both won titles Saturday. Elijah LaCosse, one of the team's captains continues to grow at 145. His performance Saturday was outstanding.Yes, he won his weight bracket, but that didn't tell the story. He wrestled so well. He has been one of our most committed workers for the last four years, and Saturday he displayed his mastery with poise and style. His matches were fun to watch because his opponents fought spiritedly, yet he overcame them with a variety of techniques and relentlessness.

"Second-place finisher Ryan Jennings (152) wrestled too. In the finals he led, but unfortunately he made a wrong turn in a scramble situation and found himself on his back. That's wrestling. One mistake can end a match. Still, Ryan showed that he can wrestle well against very good opponents.

"Third-place finisher Matthew Horrillo showed his form of a year ago when he came from behind to win in overtime in the consolation finals. His two takedowns at the end of the match showed great courage and determination. His return means a lot to the team.

"Hayden Muller placed second in the girl's division. Her loss in the finals was to one of the best girls in the state, Charlie Stewart from Bend. The match gave Hayden a chance to see what she needs to improve upon in order to contend.

"On the JV side Ian Sissel and JC Gentry were champions.

"We also had three boys record their first wins ever.

"What made the tournament most satisfying was how the team is implementing the techniques we have been working on in practice. The team is improving!"