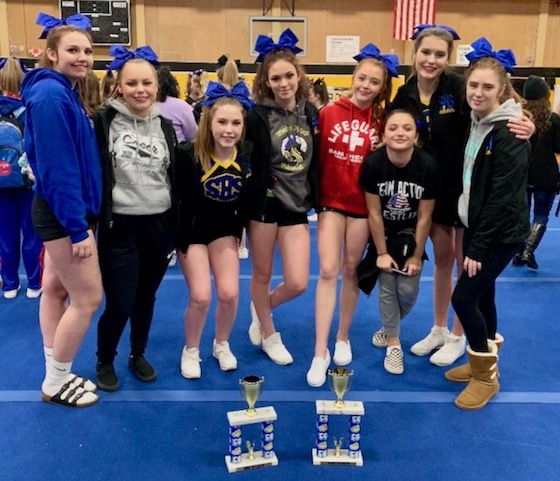 The Siuslaw Vikings cheerleaders are back in the state tournament.

The Vikings are one of 11 schools scheduled to compete Saturday, Feb. 15, at the Oregon School Activities Association 2020 State Cheerleading Championships at Veterans Memorial Coliseum.

"Although this year has been tough with having people leave the team for personal reasons and all the changes that we have had made," first-year coach Teri Straley said.

"But those who are still on the team show a lot of commitment and work hard to achieve their goal are hoping to place in the top four at state."

"We are actually down to seven girls," Straley said. "Just happened this week. We've had to change up formations and choreography to fit the team."

The Vikings have responded well to this adversity, she said.

"(Friday) they informed me that they feel so much more confident with how our routine is now than ever!" Straley said. "I feel confident in what they achieved with everything that has happened to this and they drive to continue to improve and work."

Siuslaw will perform at a dance competition Saturday in Tualatin as a final tune-up for state.

Newport won in 2019, followed by Sweet Home, Gladstone, Sisters and Ontario. Siuslaw finished ninth of among the 10 4A schools competing.

An awards ceremony will follow the conclusion of the morning session.

A complete championship schedule is online at http://www.osaa.org/docs/che/ChampionshipSchedule.pdf.