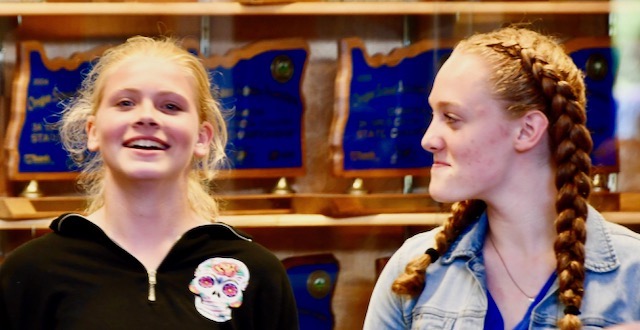 Bailey Overton, left, and Hayden Muller were finalists for Siuslaw female athlete of the year as freshmen.

Hayden Muller and Bailey Overton were finalists last spring for Siuslaw High School's female athlete of the year, as freshmen.

Saturday, as blossoming sophomore scholar-athletes, the two are headed to the girls state championships in wrestling.

Muller, at 135 pounds, and Overton at 120 placed fourth in the Oregon School Activities Association Southern Regional at Thurston High School in Eugene.

Both took similar paths Saturday, losing in the championship semifinals to accomplished opponents, winning their consolation semifinals and falling in the match for third place.

Muller opened the day losing to state No. 1-ranked Charli Stewart of Bend in the championship finals. Stewart, the 2019 state champion at 120 pound, pinned Muller in 47 seconds.

Muller lost by fall to state No. 2-ranked Taylor Ohlson of Mountain View in the third-place match in 1:58.

Overton lost by fall to Cailee Hallet of Thurston in the championship semifinals in 1:58. Hallet, a junior, was a state semifinalist at 125 last season.

Overton then pinned Churchill's Alexus Misick-Besio in 2:49 to advance to the third-place finals.

Overton lost by a tough 5-3 decision in that match to Leslie Torres of Central.

Siuslaw scored 44 points with its two wrestlers for 16th place among 61 schools in Classes 1A through 6A.

The top four placers from each of the 14 weight classes at the Southern Regional advance to the state championships Feb. 28-29 in Portland, where they will be joined by the top four from the Northern Regional.