Vikings 'dance their hearts out' at Tualatin 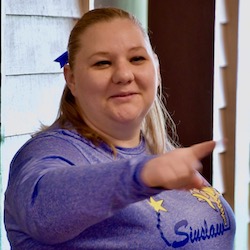 Siuslaw's first-year cheerleading coach, Teri Straley, has learned that it is a long and hard road to the state championships, but her Vikings are there.

Once again battling adversity, the team performed well this past weekend at the Tualatin Last Chance dance competition.

"They were so focused and ready to go that it was like a whole new team was out there," Straley said. "I'm looking forward to state (Saturday in Portland) and the OCCA Championships."

Straley's report on this past weekend's competition:

"The team didn't place this weekend but they performed better than they ever did all year. Even with missing one team member, they worked their hearts out. We did find out the our injured member is out for the rest of the season but she will still be coming to the last couple of competitions to support the team.

"At the competition, last minute we were asked to add a band dance and cheer to the fight song division. The girls chose to do their Cheyenne's Dance, which was created for a special needs girl that was on the team sometime ago.

"They also chose our injured member's favorite song from our camp music called Trophy. These two choices just made the girls go out there and dance and cheer their hearts out.

"This has been one rough year and week for this cheer team. We have had drama and issues, but that's high school. The big things were the people that had to quit the team for personal reasons and then our injured team member.

"They have had to almost every week leading up to a competition had to make tons of changes and remember them. Once again for state, we have to make changes but this shows their drive and adaptability to make changes fast."

The Vikings are one of 11 schools scheduled to compete Saturday at the Oregon School Activities Association 2020 State Cheerleading Championships at Veterans Memorial Coliseum.

Newport won in 2019, followed by Sweet Home, Gladstone, Sisters and Ontario. Siuslaw finished ninth of among the 10 4A schools competing.

An awards ceremony will follow the conclusion of the morning session.

A complete championship schedule is online at http://www.osaa.org/docs/che/ChampionshipSchedule.pdf.