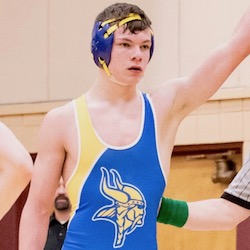 The Siuslaw Vikings wrestling team closed its home schedule Thursday with a 45-24 victory over Philomath in a dual meet at Glenn Butler Court.

Philomath was ranked No. 8 in Class 4A in the final OSAAtoday coaches poll.

Matthew Horrillo won the final match of the night by decision.

The Vikings next compete in the OSAA Boys Southern Division Regionals, Friday and Saturday, Feb. 21-22, at Stayton.