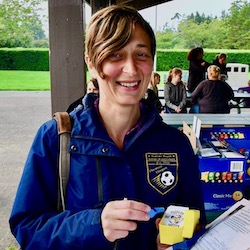 Londi Tomaro has helped soccer flourish in Florence as a Siuslaw coach and as a Siuslaw Youth Soccer Association official.

Siuslaw's final match of their first season of varsity soccer was a bit of a downer.

But Vikings coach Londi Tomaro already is looking forward to next year.

Or, in this pandemic-scrambled high school sports schedule, later this year.

"This was our final game of the season," Tomaro said Tuesday, following a 3-2 loss at Elmira. "We will celebrate our team, take a bit of a break, and then start voluntary training to prepare for the fall and our next season of Siuslaw soccer."

Tuesday's finale of a 2-win, 7-loss all-Sky-Em League season was a downer in several ways, including the outcome.

The Vikings' first-ever win at the varsity level was 4-0 over Elmira in a game in Florence, their third match of the season.

The Vikings were down four players for the rematch, two who had reached their nine-game maximum, one who was injured and one who needed to prepare for Thursday's district cross country championships.

And the Vikings also seemed a bit flat.

"What it came down to, is Elmira wanted to win more than we did," Tomaro said. "They played with that extra level of intensity that we were missing."

It was the first win of the season for Elmira, now 1-7 with its final match Thursday at Marist Catholic. The Falcons entered the match having been outscored 44-1 for the season.

Elmira scored its game-winner Tuesday in the closing minutes of the match, breaking a 2-2 tie with a breakaway goal.

"We had some scoring attempts, but were unable to connect for another goal," Tomaro said.

Down 2-1 at halftime, the Vikings tied the match on a goal by Yoskar De La Mora.

"It was a bit nerve-wracking to watch, but ultimately ended up in the goal," Tomaro said. "The ball hit the underside of the crossbar and bounced down and then into the net."

The Falcons scored off a corner kick to take the halftime lead.The Vikings had forged a tie at 1-1 on a Jason Garcia free kick just outside the penalty box.

The Vikings got off 10 shots in the match, five in each half.

"If we had capitalized on our chances, we could have won this game," Tomaro said.

But there's always next year. Or, in this unusual case, later this year.