Lady Vikings finish with a big win over Lions 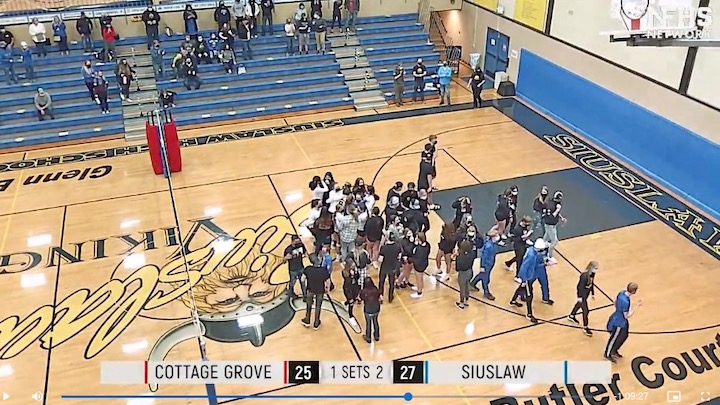 The Ashlee Cole-fired coaching era for Siuslaw Vikings volleyball is off to a rousing start.

With the win, Siuslaw finished its first season under Cole with 6 wins and 4 losses, all in the Sky-Em League.

That was good for third place, and it represented the Lady Vikings' best season since 2016, when Siuslaw was co-Far West League champion at 13-8 overall and 8-2 in league in the first of four seasons under Jon Hornung.

The win Thursday capped a dandy turnaround by the Lady Vikings, who started the season 1-3, then finished with a 5-1 flourish, the lone loss to league champion Junction City.

There will be no Culminating Week event for the Lady Vikings, but there will be satisfaction in a solid season and the prospect for even better things this fall, when the sport returns to its traditional dates on the calendar.

Siuslaw will be missing just one big part in the fall. But it will be a key one: Outside hitter Kya Blake, the only senior this season.

Blake's kill on match point Thursday put a solid finish to a solid senior season. In fact, Blake had kills on the final two points of the match, as well as on set point in the second game.

Siuslaw rallied late to take the decisive fourth set. The Lady Vikings, who lost a 3-2 thriller earlier in the season at Cottage Grove, were not about to allow the Lions to go to a fifth set Thursday.

The Lady Vikings outscored the Lions 7-2 down the stretch. Cottage Grove had the first shot at set point, but served the ball into the net, allowing Siuslaw to tie at 24-24.

Siuslaw made it 25-24 on a Blake tip-shot winner, but the Lady Lions won on a block to tie it at 25-25. A Blake kill made it 26-25, Vikings, before a dig by junior libero Hayden Muller and a set by junior setter Zoe Alberty was slammed home for the ultimate kill by Blake.

Starters Alberty, Muller and middle blocker Alizabeth Norton will be the only seniors this fall. Other returning starters include juniors-to-be Desiree Tupua at middle blocker and Hailiee Outlaw at outside hitter. …