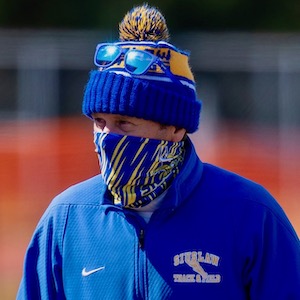 The stars have aligned for Siuslaw High School to host the 2021 Class 4A state track and field championships, Friday and Saturday, May 21 and 22, at Hans Petersen Field.

It took a worldwide pandemic, a first-rate high school facility and a tenacious athletic director to make it happen.

Oh, and it was approved by one vote, in a poll of representatives of the 4A leagues in the Oregon School Activities Association.

"Give a lot of credit to (athletic director) Greg Mulkey at Marshfield, a good friend and a bulldog," Siuslaw athletic director Chris Johnson said. "He's like me in that he doesn't like to take no for an answer.

"He put together a committee of athletic directors, one from each league, and they just went to work trying to come with as normal a state championship situation as possible."

If it hadn't been for the pandemic, the state championships likely would have been at Eugene't Hayward Field, where they have been held for decades.

Then the OSAA had to decided to throw Culminating Week back into the hands of the schools.

And then Johnson had to lobby on behalf of Vikings Nation.

"This facility, hat's off to our community for passing the bond in the early 2000s, and hat's off to those donations to make this track like it is," Johnson said.