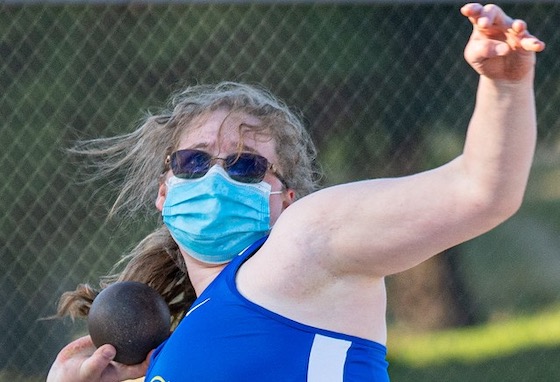 Siuslaw senior Andrea Osbon swept the shot put, discus and javelin in the girls meet and the Vikings boys dominated Tuesday in a three-way track and field meet at Cottage Grove.

Siuslaw junior Camp Lacouture won the triple jump with a PR 37-11 and the pole vault at 12-6 to lead the Vikings to the boys title with 184 points. Host Cottage Grove had 136 and Junction City 20.

Junction City won the girls title with 132 points to 122 for Cottage Grove and 74 for Siuslaw.

Other top marks Tuesday for the Vikings:

Siuslaw next hosts the Sky-Em League Show on Friday at Hans Petersen Field.

The Siuslaw Vikings Hall of Fame banquet may be canceled for the second year in a row, Siuslaw athletic director Chris Johnson confirmed.

"It's getting harder to imagine a gathering of the size we need with the (covid) numbers trending like they are," he said, "but we will keep an eye on everything and hope for the best."