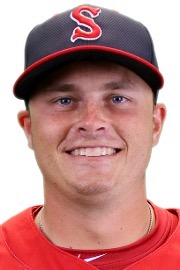 Former Siuslaw and Oregon State standout pitcher Jake Thompson is on the active roster of the Greenville (S.C.) Drive, who open their season at home Tuesday against the Bowling Green Hot Rods.

The Drive are the High-A affiliate of the Boston Red Sox, who drafted Thompson in 2017.

The 6-foot-1, 215-pound right-hander, a 2013 Siuslaw graduate, had Tommy John surgery in May 2019, performed by famed physician James Andrews.

Thompson had been pitching in late in 2019 for the Salem (Va.) Red Sox of the Class A-Advance Carolina League after spending his first two seasons in the Red Sox organization as a starter.

"Salem was grooming him to be a closer," his father, Jon, said at the time of the injury. "His numbers ... weren't bad."

Thompson had been throwing in the 94 to 96 mph range, his father said.

An all-American pitcher at Oregon State, Thompson was taken in the fourth round of the 2017 draft by the Red Sox, who made him the 131st pick overall.