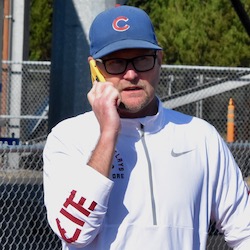 Football is in a relatively good place, says Johnson, but volleyball, soccer, basketball, baseball and softball have big needs.

"There are issues every day with officials," he said. "Football is pretty dialed in. We have enough football officials.

"Basketball, baseball, softball, volleyball, all those sports, if there is anyone local who is looking for part-time work, it would be huge."

The Vikings did land a local official for basketball last season.

"It was such a big help to have someone here who could work those junior varsity games," Johnson said.

The OSAA and partner associations of officials have been working hard at recruitment, with the ultimate inducement coming next school year.

"Because of the shortage, one of the solutions is to pay more," Johnson said. "After this school year, starting in 2023-24, they are going to double the salary of officials, because they are trying to get as many as they can."

Officiating has a major impact on scheduling, with volleyball a case in point.

"The Mountain Valley Conference wanted to start at 4:30 for JV," Johnson said. "We had it done. Put it online. Put it on the school calendar. Was done with that in May.

"Then a week ago the commissioner came back and said ‘We can't get referees that early, so you need to move your schedule back.'"

Constant change may be the norm heading into this school year, and Johnson urges fans to look at the OSAA and the school websites for updated schedules.

"The biggest reason for the constant changes is simply a lack of officials," he said.

Volleyball opening: The Vikings still have an opening for a JV coach to help with a solid turnout for volleyball. "Ashlee (Cole) is prepared to do both," Johnson said. "If they can pass the certifications, if they want to be part of the program, we would love to have them." Meanwhile, Johnson is thrilled to have Cole back after a one-year hiatus. "Ashlee's up to the challenge, and we're really happy to have her back."

Turnout up big time: There has been a big spike in student-athletes this fall, says Johnson. "Last time I checked, we had 142 student-athletes signed up for fall sports," he said. "That's a 50 percent increase from the past couple of years. Part of that is we added girls soccer, and we had a robust turnout for cheerleading, a great turnout for volleyball and 40-something boys out for football." Johnson also tipped his Cubs hat to both the school board and the school district, which waived participation fees this year. "That's big," he said. "We are excited: We think we will be competitive in everything."

Booster club update: "Cameron Jagoe has taken the president's position, which is gigantic," Johnson said. "He has a vision, and he is super organized." The Siuslaw Athletic Booster Club lost its state sanction during the pandemic, but that has been restored, and it is full speed ahead on the annual auction (Sept. 10 at Three Rivers Casino), the Hall of Fame induction-dinner and other club pursuits. "Lorie Johnson and Natalie Blankenship took on the role of auction chair, and they are rolling on that," Johnson said. Tickets at http://bit.ly/siuslawtickets

Hall of Fame update: The Siuslaw Athletic Hall of Fame induction-lunch also is Sept. 10 at the Florence Events Center, the first since 2019. "Those poor people on those teams had to wait so long. It's nice that it's finally going to happen," Johnson said. Those planning to attend are asked to get their tickets soon. "We need to give a number to the events center for catering purposes," Johnson said. "We are still selling tables. They are available (for reservation) online." Tickets at http://bit.ly/siuslawtickets