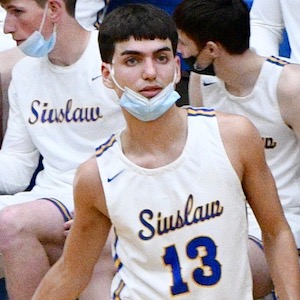 The Vikings clinched a winning record, moving to 8-4 overall with two games to play, both at home.

Siuslaw hosts Cottage Grove on Thursday, which is Senior Night at Glenn Butler Court. The Vikings close the season Friday against Bandon, a scheduled 3 p.m. tipoff.

The Vikings are now 5-4 in league play.

The first-place Tigers fell to 11-2 overall and 7-2 in league. Marshfield forged a tie for first place Tuesday with a 71-36 win at Elmira.

Junction City plays at Marshfield on Thursday for the league title.

Junction City jumped to a 9-4 lead and finished the first quarter up 13-10.

The Vikings erupted for 27 points in the second quarter, and never trailed after taking a 27-26 lead on a 3-point goal by junior Isaac Mattson, who had 16 points in the game.

Terry had 15 points in the first half and 24 after three quarters.

Tuesday was senior night at Junction City, which honored Riley Sangermano, Ben Heitz and Chase Emanuel. Seven of the 10 players on the Tigers roster return next season.

Bandon is 9-2 overall and 8-2 in the AA Sunset Conference. The Tigers' two losses were both to Toledo.