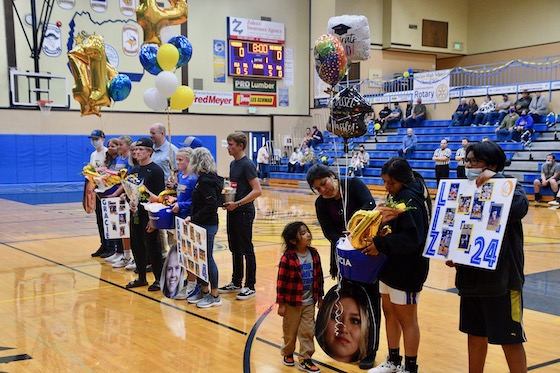 Southern Oregon University now may be rebranded as Siuslaw South.

Vikings Brea Blankenship, Gracie Freudenthal and Skyler Loomis are future Red Raiders, as is Brea's brother, Elijah, who also will further his education and athletics in Ashland.

Cottage Grove's Lions took a little of the luster off the evening by sweeping the night's games, 46-16 over the Lady Vikings and 53-46 over the Vikings boys.

Siuslaw wraps up its season today (Friday, June 18) at North Bend, the boys playing at 1:30 p.m., the girls' game to follow.

It will leave lasting memories, say the Lady Vikings.

"(What) I will miss most about being a Viking is being part of a giving community," Garcia said, "and being a team player for the softball and basketball teams."

Blankenship and Freudenthal echoed those sentiments.

Below are lightly edited texts read by announcer Chuck Johnson at Senior Night:

Brea Blankenship, No. 4
(Accompanied by mother Natalie, father Mike, brothers Elijah and Jacob)
Plans to attend Southern Oregon University to study pre-med, and running on the cross country and track teams.
Favorite basketball memory "is going to crossover tournaments, staying in hotels and the Dairy Queen trips after away games."
Advice to underclassmen is to always work hard and never give up. Always give 100 percent effort and enjoy it while it lasts, because four years will go faster than you know.

Gracie Freudenthal, No. 14
(Accompanied by mother Julie, father Alan, sister Hannah, brother Jacob)
Plans to attend Southern Oregon University, majoring in exercise science and kinesiology, and running for the cross country and track teams.
Favorite basketball memory "is sharing a hotel room with Brea and Kelsey and spilling chocolate milk EVERYWHERE."
Advice to underclassmen "is to have confidence and be courageous. You will only be as successful as you allow yourself to be. Strive for greatness."

Lizbeth Garcia, No. 24
(Accompanied by mother Guadalupe Galvan, brothers Julian and Tony)
Plans to attend Warner Pacific College to major in social work.
Favorite basketball memory is "all of the team din dins and tournaments and also being besties with the freshies."
Advice to underclassmen "is to have fun and don't be late to the bus every time and forget your shoes and not notice. LOL."

Jacob Foskett, No. 0
(Accompanied by father Nick, mother Lori)
Plans to attend Oregon State to pursue degrees in finance and renewable energy.
Favorite basketball memory was "balling every day until it was dark during quarantine with my fellow senior guys and not knowing if we were going to have a season."

Skyler Mattson, No. 5
(Accompanied by father Robert, mother Charmin, brother Izaac)
Plans to work in construction with his uncle.
Favorite basketball memory "is playing with the same group of guys since early age and always grinding on daily. It allowed us to push harder and get closer to becoming the winning team that we knew we could be one day, while also allowing us to sharpen our bond and be more than just a team. We became family, and that's what we always strive to be at Siuslaw High School."

Liam McClellan, No. 1
(Accompanied by father Kevin, mother Liz, step-mother Vonnie)
Plans to attend Chemeketa Community College for general studies or to learn a trade.
Favorite basketball memory is "all the bus rides from the past four years, of just laughing and having a good time with teammates."