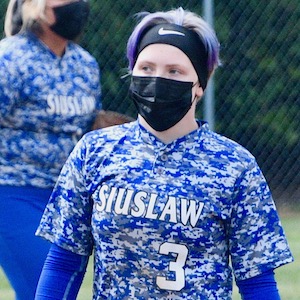 Siuslaw junior shortstop Bailey Overton was 4-for-7 with 2 home runs and 5 RBIs Friday against Cottage Grove.

Siuslaw Vikings softball now has more to build on than emerging talent, hard work and enthusiasm.

The Lady Vikings have a win.

Friday, junior shortstop Bailey Overton doubled and homered to power Siuslaw to an 8-7 victory over Cottage Grove in the second game of a Sky-Em League doubleheader at the Siuslaw field.

The Lady Vikings, 1-8 overall and in league, are on the road next week, Tuesday at Elmira and Friday at Marshfield.

"I was quite pleased at the mental toughness shown throughout the team," Siuslaw coach Sean O'Mara said. "The athletes were quite successful in at letting the first game of the night be history and focusing on the game in front of them."

Overton also homered in the first game and finished the night 4-for-7 with 5 RBIs, 4 runs and 2 stolen bases. She also anchored the defense with 8 assists and 7 putouts, including 3 tag outs on stolen-base attempts.

Junior center fielder Hayden Muller was 3-for-7 for the two games, with 5 RBIs and 2 runs.

Freshman Cate Waggoner pitched a complete game in the nightcap after hurling the first four innings of the opener.

"It is her first win as a Siuslaw Viking pitcher, one of many I am sure to come," O'Mara said. "She had three strikeouts and limited the Lions to eight hits spread over seven innings."

The Lady Vikings also had significant contributions from two other freshmen, Ashley Hennessee and Kristan Wall.

"Now that the athletes have their first win, we have our sights on not backsliding with our approach to practice and games," O'Mara said.

"There was a great deal of discussion amongst the coaching staff and athletes about building on this win through a sustained effort to improve in practice and be prepared for games ahead."

Siuslaw junior shortstop one of seven first-team infielders on 2021 4A all-star team.