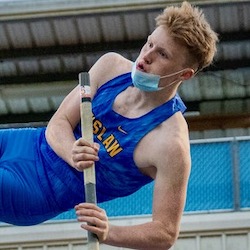 Siuslaw was fourth among the girls, with senior Brea Blankenship winning the 800 meters and senior Andrea Osbon second in the three throws, including PRs in the discus and javelin.

Siuslaw next hosts the Sky-Em League district championships next Friday and Saturday at Hans Petersen Field.

The 4A state championships are the following Friday and Saturday, also at Hans Petersen Field.

Among the highlights Friday for Siuslaw:

Siuslaw junior shortstop one of seven first-team infielders on 2021 4A all-star team.