Vikings drop a pair of duals at Philomath 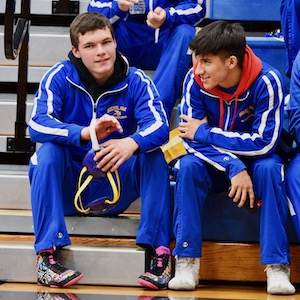 Won by forfeit was the big winner Thursday in a pair of dual meet losses for the Siuslaw Vikings wrestling team.

The Vikings lost 60-12 to Tillamook and 57-23 to Banks in a Double Dual at Philomath, with Siuslaw surrendering 42 points in each match by forfeit.

"I have six kids in quarantine. One had Covid," Siuslaw coach Neil Wartnik said. "I feel like I am competing with a phantom limb.  How I miss my missing team members.

"As I have written before, this is one of the closest knit teams I've every coached. They have gone through so much adversity and have held together. I can't speak highly enough of them."

The Vikings had only seven wrestlers competing in the 14 weight classes, while Tillamook covered all 14 and Banks 12 of 14.

Siuslaw closes its regular-season schedule Tuesday with a home dual against North Bend.

Regional championships for the boys will be held Thursday at Sweet Home, for the girls Friday at Thursday in Springfield.

Thursday in Philomath, Vikings sophomore Yoskar De la Mora was 2-0 at 120 pounds, winning by sudden victory against Tillamook and by technical fall against Banks.

Vikings senior Ryan Jennings was 2-0 at 160, dominating his match against Tillamook and winning by forfeit against Banks.

"The team competed so wel," Wartnik said. "We wrestled three top-10 teams, and we wrestled very respectably! No one was a meteor, but everyone twinkled."

There are special regulations in place this year for the Columbia and south coast, so be sure to check...

Siuslaw needs to hire two assistant coaches before it's ready to roll.