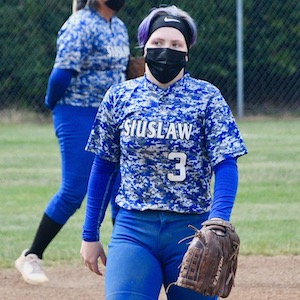 "It is an incredible recognition of the season Bailey Overton had this past year," O'Mara said.

Of her 22 hits, 17 were for extra bases, including seven doubles and two triples to go with eight homers.

Overton struck out only three times all season.

The Lady Vikings' standout shortstop was one of seven infielders on the first team, which also featured five outfielders, three pitchers, two catchers and a utility player.

"Since I have been involved with the softball program at Siuslaw, which goes back to 1996, I don't believe Siuslaw has ever had a first-team all-state softball athlete," O'Mara said.

"We have had athletes in some years get on the second team, third team or be honorable mention. But, we do not have any record of a first-team all-state athlete in our record books from any prior season."

Marist senior Layla Martinez was player of the year and Marist's Stefan Schroffner was coach of the year.

There are special regulations in place this year for the Columbia and south coast, so be sure to check...

Siuslaw needs to hire two assistant coaches before it's ready to roll.