Vikings choir is ending year on a high note 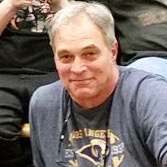 "We went to our district festival last week, and, I think, shocked most people with the progress the kids have made since last year," Morganti said. "We missed going to state by a few points. Absolutely no disappointment — and I mean that.

"They had a blast, because they knew they were good, and they did exactly what they wanted to do, which puts them way ahead of last year's group."

If anything, Morganti blames himself for the choir's near miss.

"Adjudicator Jon Baker loved them in every way except points," Morganti said. "Baker as much as said that if they'd conformed a bit more to the festival model, the points situation might have been different.

"That's on me, of course. I need to narrow the style of music we take to festivals — more classical — and probably add to the general repertoire. Next year."

This has been a busy stretch for the choir, which began practice last August.

"We just put on our pops concert — solos and duets — on Monday, and it was pretty well received," Morganti said. "Kids auditioned pieces they worked up on their own, the idea being they get to pick ‘their' music — with a little help from me — for a change."

The high school and middle school choirs are scheduled for a choir exchange with the schools from Creswell on Monday, April 22, at the Florence Events Center.

The Vikings cap the school year with a spring concert on June 4.

And keeping parents and administrators happy.

"Admin has been supportive and the community clearly wants musical kids to be proud of," Morganti said. "So I'm doing everything I can to live up to those expectations, and to keep putting them — expectations — in front of the kids.

"More kids are joining choir, their standards are rising, aspirations are forming, and general buy-in with my methods is gaining ground."

So stay tuned for next year.