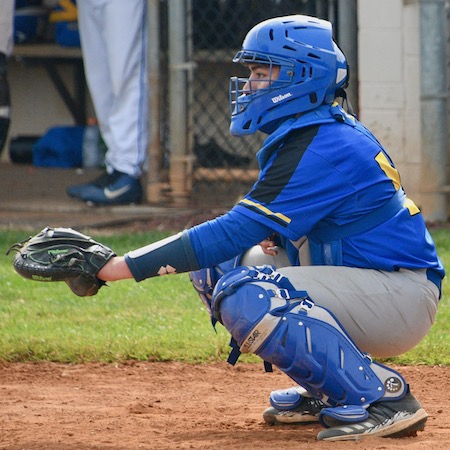 Siuslaw junior catcher Jason Garcia worked both ends of the doubleheader Friday and was 3-for-3 in the nightcap.

The Cottage Grove Lions avenged a season-opening loss to the Siuslaw Vikings on Friday, posting a Sky-Em League baseball sweep at Jiggs Dodson Stadium for their first wins of the season.

The Lions rallied late to win the opener, 6-4, then held on until the game was called due to darkness in the nightcap to win 11-9.

Siuslaw, 1-7 in league and overall, is on the road next week, Tuesday at Elmira and Friday at Marshfield.

"I am real proud of (catcher) Jason Garcia behind the plate," Siuslaw coach Tom Shinn said. "He had to catch both games of the doubleheader and still worked to block pitches and throw out runners stealing second."

Garcia also shined at the plate in the second game, going 3-for-3 with 3 RBIs and scoring a run.

Sophomore outfielder Ian Sissel was 4-for-7 in the two games with 3 runs and 2 RBIs.

Junior shortstop Beau Erickson scored 3 runs and had an RBI in the nightcap, while  junior second baseman Isaac Garza was 3-for-4 with an RBI in the opener.

"We did a good job of getting out front early (in the opener)," Shinn said. "The fifth inning was a problem for us — a couple of errors led to some unearned runs that helped their momentum.

"Give their pitcher some credit for being able to keep us off balance."

Siuslaw dug a big hole in the second game, and trailed 11-4 entering the bottom of the fifth as darkness was falling.

The Vikings had five runs in and runners on base when the game was called.

"We put the ball in play well in this game," Shinn said. "There were several instances where kids hit the ball right on the screws and it went right to the Cottage Grove players."

One of those days, and nights.